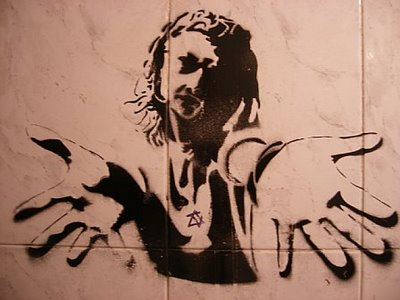 No matter where you go in the world, you will always find a place, namely a bar, that caters to Americans. In Israel, one finds that there is no place like home. And that place is called Mike's Place.

I found this image spray painted on the bathroom wall of the Mike's Place establishment in Jerusalem. Every time I went in there (which was often), this guy on the wall kept staring back at me. Finally, I decided to take a picture.

Months later, the image still continues to haunt me. It bothers me because I still don't know what it's trying to say. Is this guy Jesus reaching for the Jews? He looks a lot like all of the Jesus' I've ever seen. And if he is Jesus, what the heck is he doing up in the bathroom of a bar in Jerusalem?

I'm still so confused. And, fyi: The Star of David on his t-shirt was put there by a black magic marker.

It reminds of the day that JJB asked that I start calling him Jesus. I still pause to laugh out loud when I think about this. He stayed out later than usual the night before. The story goes that he was leaving Mike's Place and walking a girl home, when two Russian kids came up from behind him and one attempted to attack him with a knife. Despite his (obvious) intoxication, he said that he fought off his skinny aggressor without consequence. The claim was that he broke the kid's nose. But the next morning, when I got up, I noticed that there was not a trace of blood on anything belonging to JJB. I've dated a few "fighters" in my day, and I know what someone's knuckles should look like after a fight, but JJB's hands were unscathed. At brunch that morning, I asked him again to tell me the story of the fight. At first he said that he didn't want to talk about it. Then, something clicked over in his head, and he said:

"Because, I don't have a drop of blood on me from that guy!"

"Well, maybe this means that the Lord has given me magic powers. Maybe I'm here to save everyone!"

"Or maybe the reason is because you didn't get into a fight?," I said evenly.

"No, I definitely knocked that kid out," he said. "But I think I really do have God-given abilities."

I rolled my eyes. He persisted:

For 45 minutes he insisted that I call him Jesus. It wasn't until we were on the bus, heading out of town for the weekend, that I finally told him that if he insisted on being called Jesus for one more minute, I would leave him at the next bus stop, go somewhere alone for the weekend, meet the man of my dreams and forget about him entirely. It was enough to silence him for the rest of the ride. The topic of his magical powers never came up again.
Posted by Namaste at Friday, November 03, 2006

Yep, you're well rid of that nut job! Too weird on too many differnt levels. Cheers & Good Luck, 'VJ'

Hi! I've been to Mike's Place. That was interesting! Great blog.

Thanks VJ. Yes, the JJB is no more...I only fall for Jesus look-alikes, not men who really think that they are the son of G-d...

And thanks for stopping by essa. Come again!