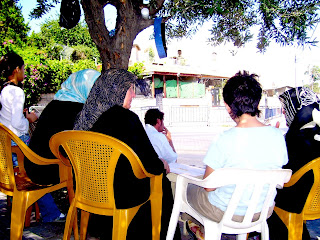 Under the olive tree with the Hanoun Family of the Sheik Jarrah neighborhood, August 2009

"Hey, let's go on a treasure hunt to see if we can find the Arab family in the news who is being evacuated from their house!," Recovering Orthodox Guy (ROG) said to me during a class break one day.

"Which Arab family?," I said dryly. My personal thoughts--on the matter of the Israeli government intentionally dislocating Arab citizens of Israel and replacing Jewish families in the homes that the Arab families have claimed as theirs for over 40 years--was more than evident in my voice.

"You know, the one in Sheik Jarrah that's all over the news? I want to check it out, but I want you to come with me. It will be an adventure! We will ask them questions about their case, but insist on only speaking Arabic! It will be fun!!"

"Somehow I don't think that the Hanoun family will think it's fun, unless we are willing to join their vigil," I suggested.

"Oh, well, let's just go and see for ourselves," ROG replied with a dismissive smile. This was more about his cowboy sense of adventure than the Hanoun family and their well-being.

ROG happened to be Israeli citizen (by way of a Jewish Orthodox upbringing in New Jersey), who, despite his bluster about concern for human rights and the human condition, remained a product of his military training and social inculcation in the foremost belief that the Jewish State of Israel was somehow always on the perennial side of "The Right"--for, at the very least--simply not being the Arab "other".

Of course, I realized that this was ROG's way of attempting to impress me with his radical and oh-so-daring attempt at cultural open-mindedness. (The thoughtful execution of his plan was methodologically clear: Invite the cute, uber-lefty academic girl who speaks some Arabic for an afternoon adventure that might just amaze her. Then, after offering her some tea and refreshing pistachio ice cream in your apartment in the beautiful stone structure that was once an Arab home, try your hardest to game her into the sack after you attempt to demonstrate to her that you are as thoughtful, lefty-liberal and utterly naive as you presume her to be.) Unfortunately for ROG, I had already met a number of eager male persons who had tried and failed in this regard. To this end, it felt like I had met ROG (or the likes of him) too many times over, but ROG, unfortunately, had never met a girl quite like me...

With the air conditioning at full blast and Israeli music on the radio, ROG spastically steared his little blue car through the twisting streets of the Arab neighborhood of Sheik Jarrah, on the East side of Jerusalem. At the sight of any random Arab person on the street, he would pull over and attempt to ask for directions in Arabic to the Hanoun family home. In my observation of this, I discovered that ROG was more comfortable if I sat demurely in the front seat while he remained dominant in his attempted banter with the Arab men, who would lean into the car look at him with his kippah, look at me with my hands folded in my lap like a perfectly decent Jewish American Princess, and immediately speak to us in Hebrew.

Of course, what ROG failed to ascertain (because he never asked) was that I knew exactly where the Hanoun family home was located. I also happened to know that despite their polite nature, the Arab men on the street kept giving ROG the wrong set of directions:

"Make a left and then you will follow the fork in the road," one said in Arabic as he gestured with his hands. "You will not understand me, my friend, but you will find your way to your home with no problem!"

ROG nodded fiercely and thanked the man as if he understood these perfectly nonsensical directions. Meanwhile, the man laughed and nodded, pretending to be doing ROG a favor.

"See how nice and friendly Arabs are when you speak to them in their own language?," ROG said to me as we drove on.

I had to at least hand it to him--a racist, albeit in complete and total denial--at least he was trying to overcome himself, even if his method was a bit unclear. Nevertheless, I couldn't figure out what was more embarrassing for him, the fact that he had no idea that he had just been dissed on the grounds of his ignorance, or that he really was incapable of fully comprehending how offensive it would be to the Hanoun family to show up at their vigil with nothing but endless political questions in extraordinarily bad Arabic? (With it being at least 100 degrees in the afternoon, one should at least bring a cold beverage to be offered to the family, if not a plate of food and sweets for everyone.)

In the end, ROG never did manage locate the Hanoun family home. I did my best to commend his efforts and thank him for the "adventure", even while we drove right by the place 2 times without him realizing it. I had decided that his complete lack of social graces when it came to the sensitive matter at hand excused him from allowing me to help him "discover" the location of the displaced family. Call me crazy, but I didn't see the fun in practicing my Arabic at the expense of people losing their home. And so, I also didn't feel it was necessary to mention to ROG that I had already gone and sat with the family as they their vigil outside of their home, and I wasn't there for the joy of language immersion. As a human being, I sat in solidarity with the victims something big, wrong and ugly that was happening to them in the name of something else called "the law", as it was invented by "the victors", otherwise known as the creators of "the law".

In the end, I never did tell ROG that I had spent several mornings sitting in the only shade offered by a singular olive tree across the street from the Hanoun family home. And I certainly didn't tell him that the experience had sent me walking the 12 kilometers back to the comforts of my home on the other side of town. I didn't tell him that I will be forever consumed by the fit of tears and frustration I felt for feeling so small and powerless to help the family that was so warm and kind to me, even as they became refugees yet again in the land grab of the Holy Land. I didn't tell ROG any of this, because I realized that I could learn more from him than he had was able to learn from me:

Because, despite the language skills I acquired in the Holy Land, I learned that the idiom of intolerance--just like tolerance--can be veiled in a smile.

I do wish more men - people in general, really - would just let go of their egos and listen to what others are really saying.

Ah, yes, he was a bit rough around the edges, wasn't he? I still think this was his attempt to put forth an effort to extend himself into the other half of the community of his home city. I actually think he was willing to know more, but just blinded by his own blinders. The difficulty was that he lacked the knowledge of how to do this in a more socially conscious way. I couldn't blame him for what he didn't know at the time. The problem was that I didn't have the time, interest or ability to gently show him what he didn't know. But that pistachio ice cream was pretty good...

To live & die in Jerusalem is to know the burden of veils of tears, troubles & terrors that have echoed down the ages. Eternally.

I for one would not trifled much with ROG, but you're a much more hopeful & tender heart than mine. It's just such an inane 'quest' as it was stated by him.

Good to hear your voice again though. Cheers & Much Continued Luck, 'VJ'

Anything, really, can be veiled in a smile.

But oh! I promise---this smile, on my face, right now, is big and genuine. Happy to see you're back!