Ain't No Sunshine When She's Gone...

At a recent happy hour, hosted by two of my absolutely gorgeous friends, I was asked by some of my favorite bloggers in the entire realm of bloggerdom, "Where in the world have you been?" Through some rather wicked, out-of-body jet lag, I attempted to explain myself:

Yes, friends, it's been quite some time since my last foray into this beautiful land of "Das Blog". Certainly my long absence deserves some explanation. Since truth is always better than fiction, let me begin at the semi-beginning:

First, it was a long, harsh, exhausting, terribly frustrating and entirely uncreative winter. I spent way too much time "feeding the people" and trying to keep myself from renting a bed at the Salvation Army, and not enough time tending to my cosmic creative purpose. I failed to develop my doctoral dissertation to the best of my ability, and as such, I spent more time beating myself up for it and hiding from my incredibly patient and supportive advisor than I did doing any productive work whatsoever. After months of performing daily rituals of affective food-service labor, and incessantly pondering my own navel (that is, when I was not shuttling gormet food from the rancourous kitchen to the hungry masses and talking for hours on the internet with friends around the world), I found myself eating far too much pesto and organic mozarrella from Whole Foods, and feeling overwhelmingly Pathetic (with a capital "P"). Ultimately, I hit the bottom of my self-induced malaise of Pathetic-dom and decided to do what any person in my position would do: Pack a bag and hit the road. From my point of view, there is no better way to feel back in one's skin than living and breathing life in another country.

Admittedly, most people would plan a small get-away to, oh, maybe the Bahamas, or something equally lush and wonderful, but no, no, no... the white sand of the Carribean would have done nothing to mollify my need for something raw and quixotic. Interestingly enough, the decision of where to go was not a problem. I did not have to go far to look for the answer. In fact, it found me. One morning in February, I opened my eyes and realized that either God had foresaken me, or I had foresaken myself. Either way it was time for me, Namaste, the very much unattached and rootless globe-trot escape artist extraordinaire, to pack my little duffle bag and head to land of the Chosen People. That morning, I applied to a summer language program, and a few weeks later, I found myself accepted without reservation. So, yes, folks, Namaste went to Israel. To Jerusalem, that is. To kick it with Jesus, Mary, Joseph, Yah-weh, Allah, and, oh yeah, some guy named Mahommad. 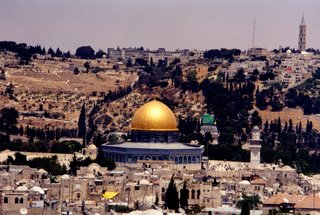 Needless to say, it was an amazing time. For starters, I learned how to read and write from right to left in a language that feels and sounds like Mozart. I climbed the Temple Mount. I talked politics and religion. I played a lot of backgammon. I smoked sweet tobacco from a water pipe as tall as I am. I rode a camel. I covered my shoulders to respect the custom of my host country, and I sometimes covered my hair to keep myself out of harm. I prayed a lot, in the company of whoever would accept me as an outsider, a woman, a white girl. And as an outsider, I played every card of ethnic and religious identity I could muster, and I found myself fitting in without too many questions, save a few raised eyebrows. Like every good Jew, I pressed my body and soul against the woman's side of the Western Wall and cried from the experience of feeling the energy of the collective human spirit passing like sweet electricity through every cell of my body. During the afternoon prayer call of the muezzin, I followed those around me to an outdoor courtyard overlooking the Old City, and quietly mimicked the prayer rituals of breathtakingly beautiful women in my midst. And, ironically, through it all, I prayed in the language that I was born into, in the way that my grandmother taught me, according to the way that her grandmother most certainly taught her. In the afternoon shadow of the Wailing Wall one day, it occurred to me that I am probably not the first lapsed Catholic to approach this sanctified place of worship and pray in the only way I know how, starting with: "Hail Mary, full of grace, the Lord is with thee..." I laughed at myself when this was the only liturgy I could muster, but, in light of my linguistic pursuits, I realized that, like the world's many languages, the world's religions are all talking about the same thing, too, just with different sounds. Perhaps, the only difference comes from the language we happen to be born into through the lottery of life and circumstance. But why split hairs?

I floated in the Dead Sea, twice. I woke up one morning and decided to ride a camel, and I did. I shared sweet tea with friends and had the honor of accepting cool, coveted rainwater from the most incredible 86-year-old fellow life traveler, who happened to be the cemetery keeper at the Mount of Olives, and a 5-time Haj to Mecca. I learned that particularly in the desert, the offer to share one's rainwater was more of an honor than receiving gold. Water is life, it's a gift of God. To share that gift is an honor, but to receive it from a stranger is something very powerful.

I encountered angels on a daily basis, and a couple of devils, too. There was one devil in particular, who worked exceptionally hard to bring me into his hell. Fortunately for me, I only got as far as the door. Along the way, this individual protected me from other, larger devils. In the end, however, I didn't feel too bad about wandering the desert with him. He served his purpose, and I am crucially aware that I served mine, too.

While I was there, a nasty military confrontation at the Lebanese border rapidly escalated into a full-scale war. To say the least, it put a damper on things. It heightened my sensativity towards other human brings, and made me very fearful of loud booms and guns and such. It made me even more aware that was walking in a place where life began, where the sun shined every day, and yet not a single person smiled.

Upon the completion of my language program, I had arranged an internship to use my Arabic and teach English with a human rights non-profit organization in the West Bank. But as time went on and the military incursions in the north felt more pressing, I decided to listen to my gut and go home. Simply put: It wasn't my war. In fact, it was nobody's war. But more than anything, after 5 weeks as a civilian in a war zone, it was my time to go. So, without much notice, I arrived at the Tel Aviv airport and politely requested to be put in the next empty seat on the first available flight out. I ended up camping in the airport for some time. It took me a few days and a couple hundred dollars to get back, but I made it.

When I got off the plan, I had no idea who would be there to pick me up. The day before, I sent an emergency email to all of my close friends, requesting that someone simply be there. It was almost midnight when I emerged from customs into the waiting area of the Dulles Airport, and to my absolute pleasure, there was Cookie, doing only what a best friend can do: Stand with open arms and welcome me home.

It is said that the best kind of wine is made from grape vines which are intentionally stressed to produce better grapes. Stressing the vine by bending, twisting, and even cutting it, ultimately produces the world's most mature, delicious and fuller-bodied wines. I've been back now for a couple of weeks, and I'm starting to feel the same way. As a friend of mine once said, "When it's dark enough, you can see the stars." I wasn't doing it at the time, but thank goodness for such a long, terrible winter. I am refreshed, clear-headeded, and finally more focused than ever, having stressed the vine.

Kathryn Is So Over said...

Back indeed! Welcome back..

I'm coming on your next trip with you...

I love this post and I really dug your blog. I can completely relate to finding one's cosmic purpose. That's why I left a career in journalism to pursue a seminary degree, and -- this is where it gets sketchy -- eventual work in a church or nonprofit. I wasn't sure what to do but I knew I couldn't continue slinging hash as a reporter, editor and columnist.

A question and a comment: I would love to hear more of your trip to Jerusalem, provided you haven't sequestered that away to a part of your memory for the time being. And what is the general topic of your dissertation?

Thanks for the time and thanks for a great read.