Living in the Seam 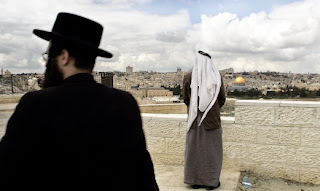 It had already been a long day. I was back in Jerusalem after heading into to Bethlehem for lunch and a long afternoon visit with my former Arabic tutor and her elderly sister.

Exhausted, overstimulated and dirty from travel, I decided to grab a beer near my bus stop in East Jerusalem at my favorite hotel cafe. The first few sips felt almost as good as a hug from a distant loved one.

Beer in one hand, and a pen in the other, I took out my notebook and began jotting down the important bits and pieces that I gleaned from the day.

Of course, because even when I am with myself, I am never actually alone, it was only a matter of time before the dark haired gentleman who had not stopped staring at me since I entered came over and asked if he could join my one-woman beer party. A young, single woman is never alone in this part of the world.

"You seem very much like the Joan of Ark type," was the opener from now Mister Dark, but now far less Mysterious.

"I will gladly take that as the insult it is not intended to be," I replied with an intentionally Southern lilt. I smiled my "coy smile" before nonchalantly taking a cold sip of frothy, local beer. Inwardly, I decided that I could take being called a Joan of Ark type over the Mary Magdalen type any day.

"American?," he asked in a seeming state of disbelief.

"Sometimes yes, sometimes no," I said in colloquial Arabic.

He laughed a good sort of laugh and took a drag from his cigarette. Much like a hyper-masculine movie star from the 1950s, he held the cigarette for effect at the "V" between the ring finger and middle finger of his hand. I silently wondered if Richard Burton had entered the room, and I was being cast in the lead of "Cleopatra". (Better yet, where is Peter O'Toole when you need him?)

As strangers do when they meet in the seam of very strange places, we chatted for a while. I decline his unfiltered cigarettes, but gladly shared a spot of hummus and fresh pita bread. From there, the conversation flowed from English to Arabic, Arabic to Spanish, Spanish to English, and then a little bit of Hebrew was sliced in between. I impressed him with my knowledge of Arabic, failed to appreciate his flawless French, but fully felt the irony of my life when he quoted Maimonides to me:

"The risk of a wrong decision is preferable to the terror of indecision," he said.

Maimonides, is, after all, one of the influential elements of why I am even here.

Mister Dark and Devilishly Brooding continued to tell me the story of his life and intellectual training. In return, I told him the story of Mahatma Gandhi. I evaded questions about myself, and only answered the ones that I thought were the most important, such as:

"What is a teacher doing in Palestine?," he replied.

"Learning about peace," I said without hesitation.

He paused and looked at me through another famous cigarette drag.

"You are far too good of a person for all of this," he said with a sweeping, cigarette hand gesture. "You belong with your students. Your babies. Your family. Not here."

"It appears that I don't belong anywhere anymore," I replied. I wanted to tell him about the last time I heard this, but decided to keep it to myself.

"But your spirit--your soul. It is too gentle. Your face is too pretty. You are fragile for a place like this," he pressed.

In moments like these, it is not the present that seems so tangible, but the future that feels so oddly displaced.

International cafes in what was once a No Man's Land because of Men who couldn't seem to agree over Land, making fragility the only thing that floats on hope where there is no water.

Where the Ottoman sultan once passed and the Romans marched back to Rome in victory...

And wasn't Jesus somewhere around here, too?

Welcome to the Realm of the Seam.

Strangely enough I'm doing this all the time here where I live. Deliberately. I'm of the firm conviction that most people only need to know 'enough' about me, and I'm continually amused by the stories that come back to me about it all. All on very limited and partial information. Just simply amazing.

The few things they do know about me are truly enough. I talk too much. I'm typically highly voluble & excitable. Even if I spend plenty of time essentially alone, reading mostly. And I regularly argue highly trained lawyers & such into the ground for sport. This is enough to know. I'm friendly to almost all, willing to listen to almost anyone & anything & willing also to lend a helping hand where I can. And of course I'm also the full 'face of the enemy' rolling around a very small conservative Southern town with full flags flying. I'm identified as the very location of 'the resistance'. The battles usually never begin unless I show up.

And of course I love to argue politics with everyone. Pakistani politics, Indian politics, British & Canadian politics with almost anyone I come across who's available. In this I'm always trying to hew towards the most pacific & loving path. The most ridiculous and humorous path in the danger filled world of today. And down though the years, I've begun to think I'm slowly, ever so gradually becoming respected for it.

Now my secret plan for the Gaza rockets, I'll share with you. Forget the bombs. Use cans of sauerkraut or canned peas. (I know, they might be more rare than the usual debris left over from the last IDF bombardment). The propaganda effect will be almost equivalent. The shock value will be greater. The discussion points instantaneously more expansive. The possibilities for peace, probably automatically increased. Yes, you will still endanger your adversaries & endanger their real estate. (Do the calculations on the terminal velocity of a 16OZ can of peas at 4-500MPH). But with what can they answer? Catapults of lettuce heads? This then might spur on more hopeful discussions & negotiations. This time with the hardliners on both sides, perhaps. It might be worth a try.

But I'm always ever hopeful, even in times of woe. We all need to be more inventive about Peace too! Cheers & Good Luck, 'VJ'